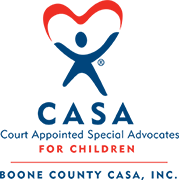 Our mission is to provide specially trained community volunteers to advocate for the best interest of abused, neglected and dependent children in Boone & Gallatin County Family Court.  Our ultimate goal is to assure that each child has a safe, permanent home.

The History of CASA

In 1977, a Seattle juvenile court judge was concerned that making drastic decisions with insufficient information conceived the idea of citizen volunteers speaking up for the best interests of abused and neglected children in the courtroom. That first CASA program has grown a network of more than 950 CASA and guardian ad litem programs that are recruiting, training and supporting volunteers in 49 states and the District of Columbia.

Boone County CASA began in 1991, under the umbrella of Human Services, which funded and administered the program for two years. When the affiliation with Human Services ended in June 1993, four active CASA volunteers formed a board, incorporated and began the search for funding to keep the program alive. There were no paid staff and the program had 35 cases. Today there are 35 CASA volunteers, 3 paid staff members. In 2019 Boone County CASA expanded services into Gallatin County. CASA serves over 160 children each year.

Ongoing support is important to enabling projects to continue their work, so we encourage donors to continue to contribute to projects over time. But if you must cancel your recurring donation, please notify us.